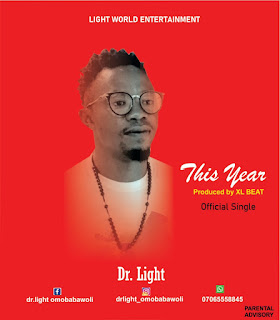 Nigerian Music Entertainment Is Not Yet Complete, Without Mentioning Ojuolape Olayemi, Popularly Known As Dr. Light (Omo Baba Woli), As Many Music Entertainers Have Tasted From His Music Well (Music Skills)

Truth must be told, Dr. Light is genuinely gifted and have showcased his music endowment to some part of the world like, Osun State, FCT Abuja, Lagos State, Portharcourt, Dubai, even United States of America, where many crowd were cheers with his power of music and performances.

Dr. light have be of aids to many artists; in reconstructed their lyrics, reharze and ensure they've got perfect pitches before moving on to recording, and this have earn him so many crown among his counterparts.

Dr. Light, as a voicing artist, romantically & distinctly mood spicer, have dropped lot of hits "Atomic Love, New Year New Money & Enjoyment" To highlight a little, in the time pass, contributed greatly to the afro fusion & afrobeats growth generally and ready to take us on an exclusive journey of problems far away mood gear up sound; this year with another vibe machine, dubbed, THIS YEAR, "This Year" is another everyone's favourite tune to tag on the top of the playlist for this year, 2023 and above.

This Year Instrumental was produced by XL Beats while recording and mastering credit awards to self acclaim Dr. light productions, ready to out of the oven in the mid-time, real soon.

Are you fully set for this incoming viral dopest sound, THIS YEAR?

FOR PROMOTION & ADVERTISE PLACEMENT ON OUR SITE

There has been no response to "E! NEWS || DR. LIGHT INCOMING BANGER"